Jonathan Wener is a Canadian business leader and philanthropist. He is an accomplished entrepreneur with interests in real estate, technology, biotechnology and recycling. He is a 6th generation Canadian who founded the Montreal-based Canderel Group in 1975 at 25 years of age. Today the company is a national innovator in real estate investment, development and management, with a history of over 70 million square feet in property transactions and offices in major cities across Canada. Recognized as a team builder and visionary, Jonathan as Chairman of the company leads an exceptional group of results-oriented professionals who are known for their effectiveness at achieving success for clients and partners.

Community service is at the heart of Mr. Wener’s view of a successful life well lived. He is an activist with a passionate engagement in the arts, education and healthcare. He has helped fund and personally supported – as president, co-chair or member – numerous hospital boards, community organizations, foundations and research centres, including the Montreal Museum of Fine Arts Foundation, the Festival des arts de Saint-Sauveur, Kehilla Montreal, McGill University’s Goodman Cancer Institute, and the Fraser Institute, where he is a trustee and member of the Executive Committee. In January 2015 Mr. Wener was appointed Chancellor of Concordia University, his alma mater. This followed 30 years of acting in various capacities, including deputy chancellor, vice-chair of the Board of Governors, and chair of the Real Estate Planning Committee. He is currently the honorary chair of Concordia's Comprehensive Fundraising Campaign. He is a vice chair of the Children’s Hospital campaign and just completed the 1st of a 2-year term as co-chair of the Federation CJA $100 million campaign.

Improving healthcare is a priority for Mr. Wener. During his tenure as president of the Montreal Jewish General Hospital, he presided over a strategic plan he developed in concert with the hospital community, he initiated an unprecedented $200-million capital campaign, spearheaded the acquisition of the neighboring Soeurs de Sainte-Croix site, and helped create the renowned Segal Cancer Centre. Today he is a trustee of the Jewish General Hospital Corporation and co-chair of the JGH Advisory board. Last but not least, with characteristic resolve, in 1989 he launched the Défi Canderel, which has raised over $22 million for the cancer research centres at McGill University and the Université de Montréal since its inception.

Jonathan was the founding president of the Institut de développement urbain du Québec in 1987, and is a past president of the Urban Development Institute of Canada. In 2003 he was honoured to be appointed a Member of the Order of Canada, and in 2009 was inducted into the Club des entrepreneurs of the Conseil du patronat du Québec for his outstanding contributions to the economic development of the province. He was presented with the Fraser Institute's prestigious T. Patrick Boyle Founders Award in 2012 and the Queen Elizabeth II Diamond Jubilee Medal in 2013. In September 2017, he was awarded the Samuel Bronfman Medal. The medal honors extraordinary service and leadership to the Montreal Jewish community over an extended period of time. In May 2018, he was appointed a Member of the Order of Montreal.

Jonathan has been married to his wonderful wife Susan for 47 years. They have 3 beautiful and accomplished girls and 8 grandchildren who they adore. Jonathan is an avid photographer, a passionate traveler and adventurer. He loves to ski and play tennis with friends and family in his spare time. 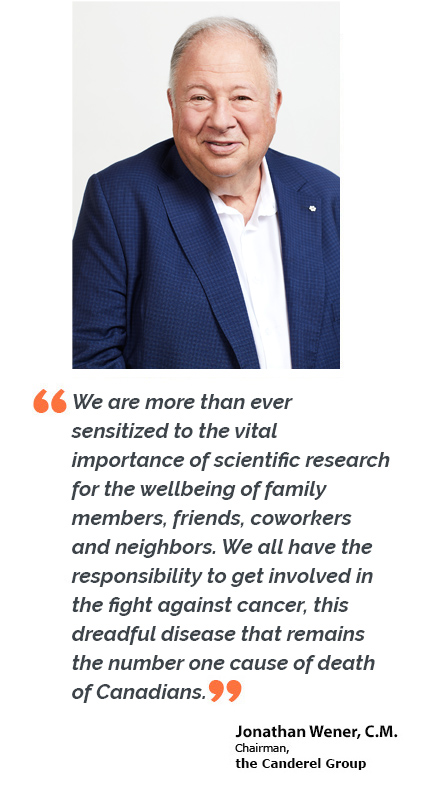